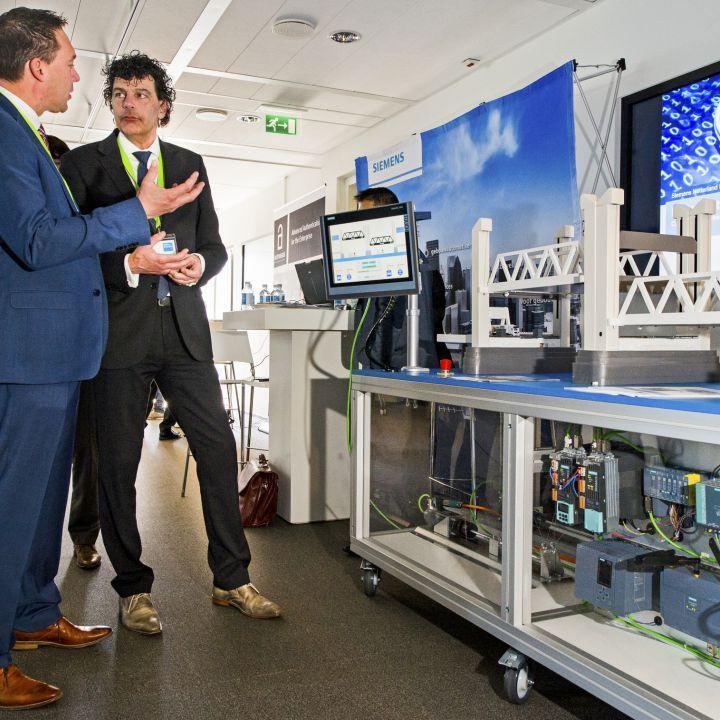 Every year, cybercrime causes 400 billion dollars worth of damage worldwide, the American Centre of Strategic & International Studies (CSIS) has estimated. The figure highlights the need for full, efficient coverage of cyber risks. In the view of Dutch security cluster The Hague Security Delta (HSD), one way of creating added value in the battle against cybercrime is to get businesses, governments, and knowledge institutes – the so-called Triple Helix – to work together. Ida Haisma, HSD’s Executive Director, argues: ‘Teamwork and knowledge sharing are vital for the creation of new cyber security solutions that are in line with customer needs. Our approach and the lengths to which we go in the Netherlands and at the HSD Campus in The Hague are unique in Europe.’ Twenty collaboration-based innovations were presented at the HSD Campus last week during Cyber Security Week. One was a training programme called Cybercheck. It is based on gaming technology and designed to raise cyber security awareness. The preconditions for developing successful cyber security innovations – access to talent, capital, and market – were a key theme at the week-long event.

In the view of The Hague Security Delta (HSD), businesses, governments, and knowledge institutes – the Triple Helix – must join forces in order to successfully combat cybercrime. The extent to which HSD is already instigating this in the Netherlands is unparalleled in Europe. At last week’s Cyber Security Week, which coincided with the Global Conference on Cyber Space in The Hague, HSD brought Triple Helix representatives together with the express purpose of encouraging knowledge sharing.

In a so-called Innovation Room, twenty collaboration-based innovations were demonstrated. One of these was ‘Cybercheck’.Explains Lennart Roosendaal, who is responsible for marketing at IC3D Media, a firm based in Breda, the Netherlands: ‘Recent research conducted by IBM Security Services in 133 countries has shown that 95 percent of cybercrime can be attributed to human failure. In order to raise awareness of cybercrime issues, IC3D Media joined up with Amsterdam security specialist G4S to create ‘Cybercheck’: a cyber security training platform, based on gaming technology.’

A second innovation presented in The Hague was ‘ThreadScan’. This solution was co-developed by ThreadStone, a firm based at the HSD Campus, Dutch research institute TNO, and WorldStream. ‘ThreadScan is an affordable solution enabling small to medium-sized enterprises to periodically scan their IT systems and websites for vulnerabilities, detecting them at an early stage,’ explains René van Etten, General Manager at ThreadStone Cyber Security.

The successful development of innovations like CyberCheck and ThreadScan depends on certain preconditions, says HSD: access to market, capital, and talent. This was clearly expressed during the Cyber Security Week. In the area of talent, for instance, primary school children were invited to a so-called hack lab, in which they were encouraged to pursue a career in ICT. There was also an international matchmaking programme for businesses and a Dragons Den, in which six companies were allowed to pitch their innovative security concepts to 30 national and international investors.

‘Investing in talent is vital to securing innovation capacity in the future,’ says Ida Haisma. ‘With this in mind, several HSD partners have jointly founded the Cyber Security Academy. As of January 2015, the academy is the first institute to offer an accredited master programme in the field of cyber security.’

The Hague Security Delta (HSD) is a unique security cluster in which businesses, governments and knowledge institutes work together on innovation and knowledge development in the field of safety and security. The Hague can rightly be called the Cyber Security Capital of Europe: the Dutch city is home to 400 security businesses and key players like Cybercrime Centre Europol, the National Cyber Security Centre, NATO Communications and Information Agency, and the Cyber Security Academy. The HSD Campus offers world-class facilities, including living labs, training facilities, flexible office spaces and meeting rooms. It is a place where security professionals are inspired and can connect to capital, funding, and highly educated multilingual talent.